The cooling of the Earth’s climate started 30 Ma ago, but the northern hemisphere glaciations are primarily during the Quaternary Era (2.6 to 0 Ma). Several times the Alps were covered by a large, 2 to 3 km thick, ice cap.

The present day relief was sculpted by the glaciers. Since their retreat 10’000 years ago, the relief has been modified by numerous landslides on the flanks of the valleys, and by the erosion of moraines by rivers. Climate warming 9’000 years ago allowed the settlement of new inhabitants in the Val d’Hérens, testified by the 'pierres à cupules', carved stones from that epoch.

The last climatic optimum (warmest) was 6’000 years ago, the one before 115’000 years ago. In between these warm phases the Alps were covered by a three kilometre thick ice cap, referred to as the Würm glaciation. Only a few summits emerged above this cap, and the Rhône glacier, extended to Lyon in France, was 350 km long. 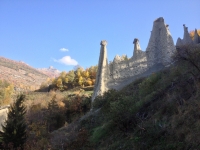 e major glaciations in the northern hemisphere were during the Quaternary Era. The Earth's climate actually started cooling earlier, 30 Ma years ago, but these first glaciations started in the Southern Hemisphere, predominantly in Antarctica. It's the second cooling phase 10 Ma ago which dramatically affected the North, particularly in the last 2-3 Ma. Some glaciers may already have existed in the Alps 10 Ma ago due to the presence of high mountains now, but their traces have been erased by tectonic movements and subsequent glaciations.

However it's the last Quaternary glaciations, between 600’000 and 10’000 years ago, which are responsible for the Alpine relief visible today: the relief developed under the ice cap. The retreat of the glaciers, removing the support of valley walls, engendered enormous landslides that covered the fossil relief. Additionally, deep river erosion of glacial moraines produced strange geological formations, like the Euseigne pyramids for example.

For more info on glaciations see: the site of prof. Stuart Lane, on Wikipédia and also on PDF. 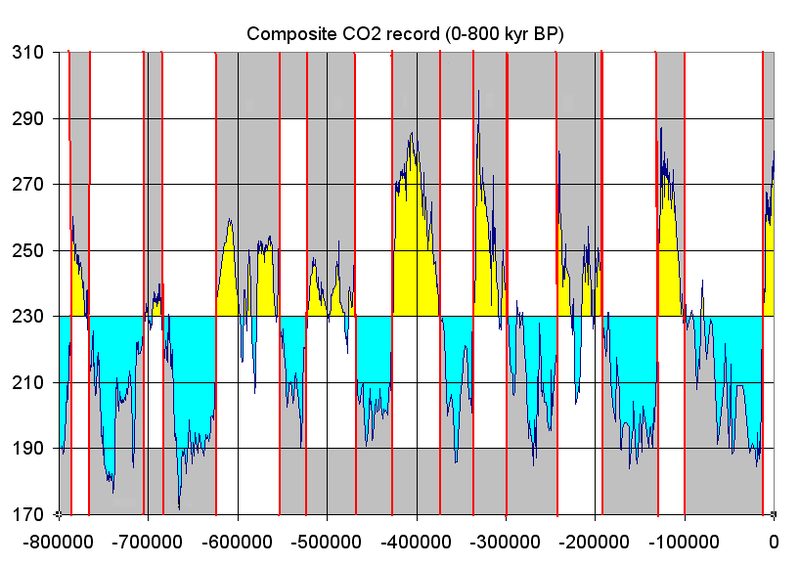 The major change following this glacial retreat was the reappearance of the forest and fauna. The present-day climatic conditions began around 10’000 years ago (Pleistocene-Holocene boundary), with the melting of the ice cap in the North Atlantic Ocean and the return of the Gulf Stream. 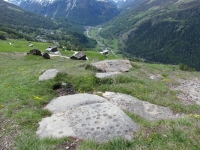 The climatic optimum since the last glaciations was between 9’000 and 6’000 years ago. This corresponds with the beginning of agriculture and of the pre-dynastic Egyptian, Indus and Mesopotamian civilisations. And very possibly with the (re) arrival of the first inhabitants in the Alps. The valleys provided the essentials for survival and with the milder weather, were almost certainly settled rapidly. Settlements grew particularly in transit valleys, important passageways connecting northern and southern Europe.

The famous pierres à cupules were possibly carved by these first inhabitants of the Val d’Hérens. There are superb examples of this prehistoric art around Evolène.

Following this period climate cooling occurred culminating with a small ice age between the 15th and 19th centuries and the advance of alpine glaciers. The moraines in the upper Val d’Hérens, in Ferpècle and above Arolla originate from this glacial advance (see Field Trips).

The last decades of global warming have completely inversed the situation: all Alpine glaciers are severely retreating.